The State-Wide minimum wage becomes $9.25 per hour beginning January 1, 2020. The minimum wage in Cook County will become $12.00 per hour and increase to $13.00 per hour in the City of Chicago. The change to the State-Wide minimum hourly wage will result in an increase of Workers’ Compensation Weekly Temporary Total disability benefits. Under Illinois law, this benefit will become $246.67 per week for a single person and will be raised by 10% for each dependent, not to exceed $370.00 per week or the employee’s average weekly wage, whichever is less.

Please note this State-Wide minimum wage is scheduled to increase again on July 1, 2020 to $10.00 per hour. The Workers’ Compensation temporary total disability minimum rate will increase to $266.67 per week for a single person and will be raised by 10% for each dependent, not to exceed $400.00 per week or the employee’s average weekly wage, whichever is less. The minimum permanent partial disability rate will similarly increase for low wage workers.

Effective January 1, 2020, it becomes lawful for persons 21 years of age or older to possess, use and purchase limited amounts of cannabis for personal use. For those injured on the job, this means that if a post-accident drug test is positive for cannabis consumption, the work injury is no longer automatically denied as a result of that test, provided your consumption was from a legal purchase.

END_OF_DOCUMENT_TOKEN_TO_BE_REPLACED

For every 100 workers at Amazon facilities, nearly 11 were injured on the job in 2018, making it three times as dangerous as employment across the private sector, and twice as dangerous as warehouse work in general, according to the study from a coalition of more than 40 groups, including the National Employment Law Center and United for Respect.

Based on logs from 28 Amazon facilities in 16 states, the study found….click here to read the full article via CBS News

The holiday-shopping season, and the extended hours that come with it, are taking a toll on America’s retail workers.

Employees at shopping malls and other outlets in 2018 were more likely to get sick or injured than the prior year, making it the only U.S. industry with a meaningful uptick. The increase means retail-store workers are now worse off than those working in the manufacturing sector. According to the Bureau of Labor Statistics, 3.5 of every 100 retail workers suffered from illness or injury last year, up from 3.3 in 2017 and compared with 3.4 in manufacturing.

The uptick in non-fatal injuries, from sprains and tears to…

END_OF_DOCUMENT_TOKEN_TO_BE_REPLACED

Senator and presidential hopeful Elizabeth Warren is drafting a bill that would ban “mega mergers” between the nation’s largest companies as well as try to improve the bargaining power of short-term and temporary workers.

It would also grant gig workers the power to unionize, a potential landmark change for rail-hailing companies like Uber Technologies and (click here) to read the full article via CNBC.

Editor’s note: The original article appeared in the Atlantic technology section on June 25, 2018.

I’m sure I looked comical as I staggered down a downtown San Francisco street on a recent weekday, arms full of packages—as I dropped one and bent down to pick it up, another fell, and as I tried to rein that one in, another toppled.

Yet it wasn’t funny, not really. There I was, wearing a bright-yellow safety vest and working for Amazon Flex, a program in which the e-commerce giant pays regular people to deliver packages from their own vehicles for $18 to $25 an hour, before expenses. I was racing to make the deliveries before I got a ticket—there are few places for drivers without commercial vehicles to park in downtown San Francisco during the day—and also battling a growing rage as I lugged parcels to offices of tech companies that offered free food and impressive salaries to their employees, who seemed to spend their days ordering stuff online. Technology was allowing these people a good life, but it was just making me stressed and cranky.

END_OF_DOCUMENT_TOKEN_TO_BE_REPLACED

Thursday September 5th marks the start of the 100th season of NFL action. Injuries are nothing new in the NFL and are more or less considered a common occurrence. Getting compensated for these injuries should be just as common but sadly it isn’t. Here are a few facts about Workers’ Compensation for NFL players :

END_OF_DOCUMENT_TOKEN_TO_BE_REPLACED

Uber drivers might not be considered employees by Uber, but rather independent contractors. Like many disrupter companies, Uber has very little interest in following the workers’ compensation laws in the States that they operate so that they can save money. This is important to Uber since they lose hundreds of millions of dollars each year as they increase the reach of their business across the globe. This isn’t surprising considering that Uber has sought to upend many of the state and local regulations regarding taxi and chauffer licensing. They certainly don’t want to pay health care insurance for their drivers either. When people think of Uber, they usually don’t think about layers of companies that make a company like it. Uber prefers to attempt to dictate what the law should be for their benefit by hiding beyond their wholly-owned subsidiary Raiser, LLC. Uber is protected through direct litigation because of Raiser LLC. By doing so, Uber claims that when one of their drivers gets hurt while on ridesharing duties are not employees. While this would have most people scratching their heads, in in places like Chicago, Illinois, the laws seem much clearer in establishing that Uber drivers are indeed employees while transporting or driving to transport passengers. What is clear is that Raiser is not associated with Lyft and Lyft is not associated with Uber.

In all likelihood, most people who aren’t working for Uber don’t realize it, but Raiser, LLC pays the Uber drivers for their rideshare fees. Basically, Uber collects the money and Raiser pays the drivers. By doing this, Uber claims that it doesn’t directly employ the drivers. At the end of the day, Raiser basically cuts the driver their checks by sending funds to a driver’s bank account. Then, once per year, Raiser sends the drivers a 1099 tax form for work as an independent contractor. When a driver has an issue with Uber, the driver has to take it up with Raiser, which acts as a protective shield or intermediary for Uber where the drivers will be coldly directed to “Terms and Conditions” to deal with their concerns. In issues involving workers’ compensation, the major concern for an arbitrator or commissioner is evaluating direction and control. If someone exercises a certain amount of control over the way in which another person does the job duties, then an employee-employer relationship is established. Most employers like to avoid employment relationships for liability and tax reasons, but their avoidance sometimes backfires. Ironically, in a personal injury situation, Uber seems to clearly be in an agency relationship with the driver while the driver is picking-up and dropping-off passengers. It certainly seems to be hypocritical to have drivers acting as agents of Uber, but then when those agents are hurt during agency, Uber will not provide the basics of a claim like providing disability checks or paying for medical bills.

Although drivers must use Uber’s app for picking-up and dropping-off passengers, Uber claims that they simply don’t employ the drivers when they are hurt during that software-driven, nearly automated process. Clearly, without the app, Uber drivers wouldn’t be able to do their job. Further, the app provides a medium of communication for the Uber drivers and potential customers as well as a portal between the drivers and Uber. To say that Uber doesn’t control its drivers certainly seems to be contrary to the daily functions of a driver using Uber’s app. While Raiser LLC is liable for any rideshare accident that happens at Uber, when someone makes a claim against Uber, the claim would also be against Raiser, LLC. Legally, Uber drivers are borrowed employees of Raiser LLC or the subsidiary Uber uses in the Chicago market. As far as Uber is concerned, drivers don’t work for them even though they use their app continually and display the brand name clearly.

END_OF_DOCUMENT_TOKEN_TO_BE_REPLACED

If you are a commercial driver or you know one, it’s important to educate yourself about drowsy driving, what helps mitigate it, and what makes it worse.

1. Get Enough Sleep Before You Drive

END_OF_DOCUMENT_TOKEN_TO_BE_REPLACED 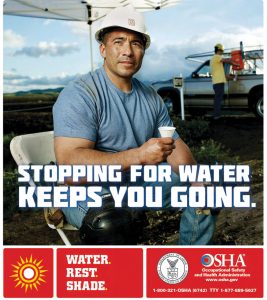 Most heat-related health problems can be prevented, or the risk of developing them can be reduced. For indoor environments, refer to the information below.

The best way to prevent heat-related illness is to make the work environment cooler. A variety of engineering controls can reduce workers’ exposure to heat:

END_OF_DOCUMENT_TOKEN_TO_BE_REPLACED

If you or a loved one pays Medicare premiums by automatic deductions from a Social Security check, some of your insurance coverage could be cancelled.

A “processing error” led to premiums for Medicare Advantage plans (Part C) and prescription drug plans (Part D) to go unpaid nationwide for 250,000 retirees – all the way back to January – according to…..

Click here to read the rest of the article at NJ.com.